Due to today’s stressful living and overexerting personal, occupational and social pressures, people are living a life of mental distortion. These strained conditions affect the mental health of the person. As a result, the cases of dementia are increasing rapidly. Dementia was used to be rare in nature previously, the senile nature of the people, where they lose a chunk of their memory was at the later ages when they grew old. But in recent times it has been observed that the cases of dementia have increased. They are evidently common now, even in the cases where the patient is pretty young.

If we talk about recent statistics, One in 8 people over age 65 in the United States has Alzheimer’s disease and nearly 50% over age 85. In 2014, an estimated 5.2 million people in the United States are living with Alzheimer’s disease. Between 2010 and 2050, the oldest-old are expected to increase from 15 percent of all older people in the United States to one in every four older Americans (24 percent). An additional 15 million old people – individuals adds to the high risk for developing Alzheimer’s.  The 35.6 million with dementia worldwide in 2010 is expected to double by 2030 to 65.7 million, and then nearly double again by 2050 to 115.4 million “Dementia” is a broad term that describes a variety of diseases and conditions that originate in the body when the nerve cells, commonly known as neurons in the brain no longer function normally or they are dead that causes changes in one’s memory, behavior, and ability to think clearly. Dementia can be recognized to appear in an individual when 2 of these core mental functions get significantly impaired What are types of Dementia?

The second most common form of dementia is vascular dementia that occurs when the brain cells get malnutrition. Decreased blood flow to the brain is the major cause of the reduced supply of nutrients and oxygen to the brain

In Ayurveda when we talked about dementia, Acharya charak has mentioned a lot of things which are really very good for these situations. The medhya rasayanas have been recommended in case of dementia treatment. These are a classification of specific herbs that have potential to treat dementia in here in a purely organic and natural way. In his guided protocols below mentioned herbs and remedies are recommended beast in case of dementia

These are just some of the herbs that have been mentioned in Charak Samhita. Along with these, there are multiple other herbs and herbal combinations which act on the root cause of dementia. These potential herbs act on the root cause of dementia like providing proper nutrition to the cells and the neurons. They also help in relieving stress and maintaining the peace of mind.

Each herb is miraculous in itself and if these herbal combinations are used in requisite combinations and doses, they are very beneficial to treat cases of dementia. It is very important that the medications are taken in a proper therapeutic dosage so that the desired effect of these combinations against dementia could be achieved and the patient can be benefited with miraculous improvements right from the very first week of their consumption. 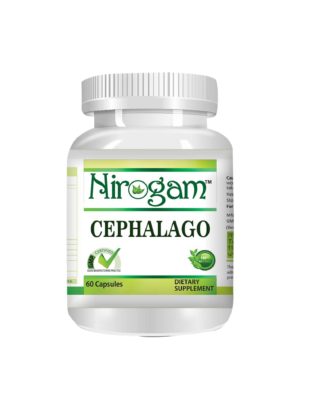 Cephala Go is a unique herbal blend of brain tonic herbs that support healthy head and neck. It promotes mental energy levels and is an effective cerebral booster. The product is a powerful tonic for brain and neurons that can be administered in the conditions like Nidrakshaya (Sleep-related disorders), Shirashoola (Headaches), Svarakshaya (Voice related disorders) as well as dementia. The combination is effective in managing and treating Dementia.

It also supports the mental health and acts as an adaptogen that alleviates neurological afflictions responsible for mental stress. Cephala Go is a unique herbal supplement that is an excellent stress reliever, antispasmodic and a mild sedative in action that causes relaxation of the nerves and if taken at night facilitates restful sleep.